The Fournel mineral deposit in the Hautes-Alpes is one of the main silver lead deposits in the Alps, but it is modest in size on the national scale.
It is an alpine ore, hosted in sedimentary rocks and strongly dislocated by the late tectonic pressures. The origin of the metal reserves is not known. The ore is almost exclusively galena intimately associated with a gangue of quartz and barite.
The output was at times considerable to the point that the ore could give up to half a ton of galena per square metre. But the difficulties of extraction were numerous: a country rock among the hardest in the world; a fragmentation of the field into multiple decametric panels; a mineral that is mixed and hard to enrich. 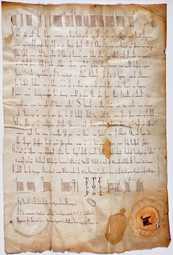 Charter of 1155 granting the dauphin the right to coin money

The old mine is medieval
The ancient extraction dates between the 10th and the 13th century. The rare archival documents and the radiocarbon dating of the rock do not allow us to be more precise, nor to say whether it was a continuous or discontinuous activity. The mine was exploited by miners who mastered the techniques at the time. The revenues generated were controlled by powerful figures such as Giraldus Malvicinus, then the Church of Embrun and later the Count of Albon who governed Dauphine.
All the outcrops were discovered, from the bottom of the gorge to the escarpments that dominate the Durance.
The ore was mined until the surface panels were depleted, sometimes over a distance of 150 metres deep into the mountain. The work was organised opportunistically: portions of galleries and wells were gradually added to each other to ensure the ventilation and drainage of sites. The excessive hardness of the rock was overcome by the application of fire, without leading to deforestation of the surroundings, contrary to popular belief.

Over the course of 3 to 4 hundred years, several thousand tons of lead and about ten tons of silver had been extracted which fed the manufacture of local currencies.
The mine was known to all, well beyond the Haute-Durance, the latter being a major route: the pilgrims stopping at the Commandery of St John of Jerusalem could not ignore an activity which gave rise to the name of the village (Argentière).
Thanks to the mining activity, the village grew around the castle of Argentière and gradually replaced the neighbouring village of Rame, a former Roman place destroyed by floods.

The modern mining spans 120 years from 1785 to 1908 with the majority of the activity concentrated over a fifty year period. One can distinguish three phases: a start, a climax and a decline. The startup phase was long and fraught with errors. At the end of the eighteenth century, the Schlagberg company established what appeared to be a model establishment, complete and autonomous, but completely neglected the investment in the underground parts. The Allemont company built too big and annihilated its cash by wanting to simultaneously exploit too many deposits in Oisans and Briançon. Duclos de Boussois technically got the Fournel mine back on track, but his temperament threw him into conflicts which put the company in troubles and lead to the dismissal of the bad manager.

Afterwards for 20 years, the mining reaches its peak under the direction of Pierre Suquet, a civil engineer from Aix-en-Provence. It was a time of economic prosperity, technical innovation and social calm. Underground mining progressively extended over 400 metres of length and 150 metres of unevenness, equipped with a pump and a winch, both operated by hydraulic wheels underground. A model establishment was running at full speed at the bottom of Fournel Gorge, equipped with the most efficient mechanical devices of the time. The annual production was then 500 to 700 tons of concentrated ore, sent to the large foundry Luce & Rozan of Marseille, a turnover of more than 200,000 francs at the time.

The workforce grew to 300 to 400 workers, more than half of whom immigrated from Italy: substantial figures for a municipality with a population about 1300. The Fournel was thus the first employer in the Hautes-Alpes. The Italians lived in homestays and depended on local trade for their supplies and canteen at the mine. In addition to miners or washers, the mine permanently employed ten craftsmen (blacksmiths, carpenters, masons). It was also home to muleteers, wagoners, loggers and various suppliers.

After the banking crisis of 1870, the mine went into recession: the exhaustion of the reserves was near. Two English companies tried to restart the operation. The Argentiere Mineral Co. had the merit of completing the Great Flow Gallery in 1879, but the little ore found in the depths did not balance the investment.

A decade later in 1892, the French Mine Ltd modernised the facility for the last time but also failed to find ore reserves. A decade later, a considerable effort was made by Compagnie des Bormettes: the operation was restructured, but only one new oreboard was found. The new operation only worked for a year. In 1908, the deposit was considered exhausted.

In the nineteenth century, for 35 years, the activity of the mine was continuous. Some of the workers from L'Argentière were able to make a career there. Some social conflicts, particularly in 1850 and 1873, may have contributed to the emergence of a feeling of discontent among the working class. When the operation was suspended in 1881, some residents did not hesitate to follow Hoskin, the chief miner in Canada, to exploit a gold mine.

In 1908, the mining stops definitively and at the same time the hydraulic work of Gilbert Planche began. Thus some of the personnel moved from the world of mining galleries to that of diversion tunnels. A new industrial area begins in L'Argentière on the social grounds that the mining activity had prepared.

During its period of prosperity, the Fournel mine enjoyed a recognition that made it appear in several geological and industrial publications. Many specialists visited the mine, including the Geological Society of France, on an excursion on September 9, 1861. Several times photographers have captured the establishment nestled deep in the gorge and the mining tourism was already in place. The Gazette "Le Dauphine - mail of the thermal waters of the region" recommended in August 1864 to visit "the silver lead mines of Argentière (...) which are currently thriving under the able direction of Mr Suquet." Later the tourist guide Joanne says: "Guide to visit the mines, Mr Barneoud, guardian of the mine and cafe in Bessée-Basse." 150 years ago, the first tourists had the choice: to climb the Ecrins and / or explore the tunnels of the Fournel.